The Castles of Alonso de Monroy

Alonso de Monroy, a fascinating character whose life took place at the end of the fifteenth and first years of the sixteenth century in the territory of the current Extremadura and who reached the position of master of Alcantara, has been described as a "lord of war". Those who consider him to be such are not unreasonable: as a young man, as a member of the military order of Alcántara, he received a war instruction that he would soon put into practice in the wars within his own lineage for the control of the fortresses of Belvís and Monroy (1455).

Shortly afterwards, he was the protagonist of the wars that tore apart the Order of Alcantara (1464-1472), between the then Master of the Order - Gómez de Solís - and Monroy himself, who held the position of head of the Order and aspired to the mastery. This internal conflict in turn overlapped with the one that confronted King Henry IV with much of the nobility of the kingdom, since the master did not hesitate to align himself with the nobility and the head of the Order with the monarch.

During the course of these wars Alonso de Monroy was imprisoned in the central convent of the Order, located in Alcantara, and took on behalf of the king the fortresses of Trevejo, Azagala and Coria, also taking control of Piedrabuena and Mayorga, as well as the city of Cáceres, Alburquerque, Zalamea, the seat of the Order in Alcantara and Montánchez.

After this succession of triumphs, in 1473 he was elected Master of Alcantara, but stability had not come either to the Order or the kingdom: his position was questioned by other candidates and his appointment was not ratified by Henry IV, so the war continued, and he was again captured in the fortress of Magacela.

Momentarily Alonso de Monroy had lost any possibility of achieving his aspirations, but in 1474 Henry IV died and the civil war began between the supporters of his daughter, Joan, and those of his sister Elizabeth. This change in the political and military panorama put our character back on the regional board, because the Catholic Kings did not hesitate to use his services after his release. From then on he led another bitter conflict against those who supported Juana la Beltraneja and her husband, the King of Portugal, which led him to fight for much of the territory of modern-day Extremadura, one of the most relevant episodes being the conquest of the walled city of Trujillo and its citadel (1475).

But luck is never constant and the Catholic Monarchs, attending to their own interests in the region, ended up abandoning Alonso de Monroy and favouring their rivals within the Order. Forged in the war since his youth, Monroy did not resign himself and began in 1477 his last conflict, now against Isabella of Castile, prolonging the war in the region for two more years.

In 1479 Castile and Portugal signed the Treaty of Alcaçobas, which put an end to the succession war, pacified the kingdom and consolidated the power of Isabel of Castile, but Monroy remained in the armed defense of his positions. Finally, politically and militarily isolated, but in a position of power with a group of followers, many of them murderers and criminals, he continued his activity in the Azagala fortress, from where he displayed all kinds of violence against the environment. It was there when, in 1511, the warlord found death.

The setting in which all these events took place, related to the fascinating life of a true prototype of a "warlord" in the 15th century - the current province of Cáceres and the north of that of Badajoz - largely maintains some of the characteristics that already marked the landscape and the life of the people in the times of Alonso de Monroy.

In a special way, many of the forts, castles and urban walls that had such a great political and military influence in those times of unceasing armed conflicts, unbridled ambitions and daily violence have been preserved to this day, with better or worse fortune, times that forged generations of warriors and a society organized for war that, once internally pacified in the times of the Catholic Kings, would soon make the leap to the border of Granada, to Roussillon, to Naples or to America.

The traveller who wishes to immerse himself in this setting can start his tour by visiting the Belvís de Monroy fortress, an impressive stately fortification located in the Arañuelo field, the cradle of our character's lineage and the place where he had his first war experiences when he was barely a young teenager. From there he can travel to Trujillo (a journey of barely half an hour), whose urban walls, fortified houses and Islamic fortress witnessed the effective action carried out by Monroy in the service of the Catholic Monarchs.

From Trujillo, we head (forty minutes by car) to the city of Cáceres, where we must walk along its walls and Almohad towers, enjoy the formidable appearance of its fortified houses and get lost in an urban layout that maintains the structure of the time of Alonso de Monroy.

During the visit to this city it is worth stopping in front of the façade and entering the premises of the Fortress House and Golfines de Abajo Palace, a contemporary building of our character that was built by the former head waiter of Isabel la Católica, Sancho Paredes Golfín. And barely three hundred metres away the traveller can rest in the National Parador, located in the old Torreorgaz Palace and in the Ovando-Mogollón, Perero y Paredes’s House, examples of urban strongholds whose traces were already built in the times of Monroy.

The great families who settled in Cáceres did not limit themselves to building their palaces and fortresses in the interior of the city, but also in their agricultural possessions: the castle of Las Arguijuelas de Abajo, a paradigm of rural fortresses, located in the middle of the Ruta de la Plata and barely fifteen kilometres from Cáceres, is an example of this.

From Cáceres, we will move, in less than an hour, to Alburquerque, whose elegant and solid fortress presides over an enormous environment, which is also witness to the performances of our character. From here, the traveller can finish the itinerary in the castle of Montánchez, a little more than an hour away from Alburquerque, concluding a wandering in which he will have followed the routes of those who never stopped fighting and recalling the life of a 15th century warlord, the archetype of a combatant whose life represents the immediate precedent of those others who, shortly afterwards, would begin to embark for America and there reproduce the way of life they had inherited in their native lands. 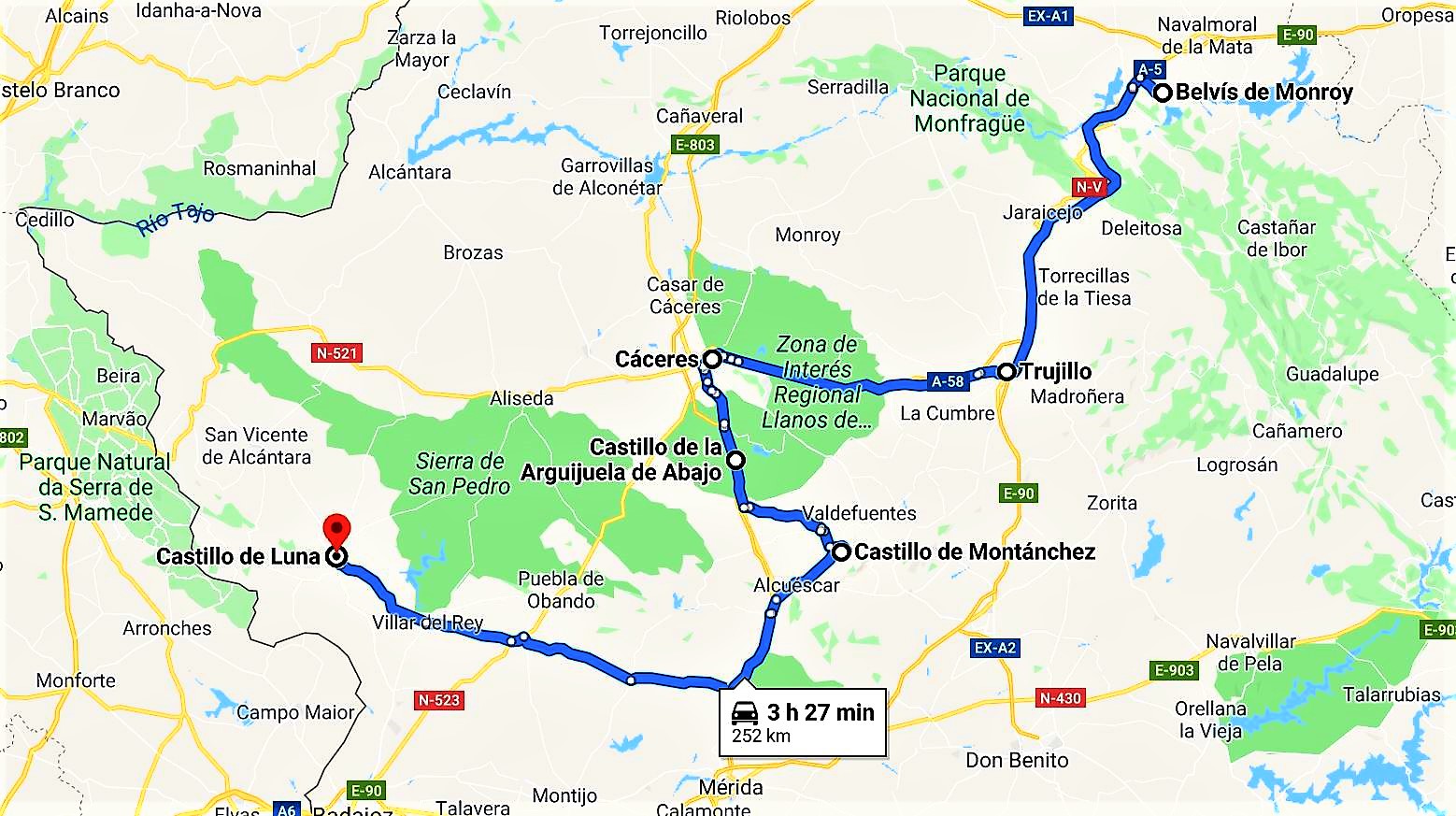 In the historic city of Trujillo, birthplace of discoverers, you will find this lovely Parador, occupying the former convent of Santa Clara and preserving the peaceful and calm atmosphere of the convent buildings. Inside there are two lovely cloisters, one with Renaissance arches and columns. The second gives the complex a touch of brightness that makes the atmosphere even more beautiful. This is an ideal hotel for relaxation and leisure, as well as work. The rooms are peaceful and the Parador offers beautiful, elegant function rooms, along with a seasonal swimming pool.

In Trujillo, all roads lead to the Plaza Mayor (Main Square), the heart of the city, surrounded by very beautiful and important buildings. In the middle of the square stands the bronze statue of Francisco Pizarro astride his horse. Together with San Martín de Tours Church, the Palacio de la Conquista (Palace of the Conquest) and the Casa de las Cadenas (House of the Chains), it will leave you with the memory of a truly beautiful square. Trujillo Castle is another lovely spot. It is visible from any point in the city and houses a sanctuary dedicated to the patron saint, the Virgin of Victory.

Trujillo is blessed with all the charm of a historic city and the beauty and serenity provided by the passing of time. This is a place you will love discovering.

If you accept our invitation to take a stroll through history, you will enter the city walls through the Arco de la Estrella (Star Arch) and come to the Parador de Cáceres, a Renaissance palace in the heart of the city's old quarter, which has been declared a World Heritage Site. You will fall in love with the Parador's elegance and exquisite refurbishment, enjoy pleasant chats in its function rooms and meals in the cozy garden.

The restaurant, outdoors areas, café and guest lounge are all pleasant places to meet and talk. The renovated Parador combines tradition and modernity. It is fully equipped with the latest technology and incorporates environmentally friendly features such as high-performance boilers, LED light bulbs, and heating and cooling control systems.

Follow any route through the cobbled streets of Cáceres and along your way you will pass house-fortresses, churches, the ruins of Old Cáceres or its Arab walls. And it is only a matter of time before you come upon Santa María Square, surrounded by Renaissance palaces, or discover treasures such as the museum's underground cistern and the Royal Monastery of Santa María de Guadalupe.

In Cáceres you can bear witness to the remaining traces of the Via Delapidata, a Roman road that once linked Seville and Astorga, also used by pilgrims heading for Santiago de Compostela. You may not be here to begin or continue on the pilgrimage route, but you may feel like traveling a little over an hour to visit Monfragüe National Park and its Biosphere Reserve. It is well worth it for the opportunity to see the Tagus and Tiétar rivers as they flow through the thickets and Mediterranean forest. If you are a bird watching fan, this is the ideal place to spot griffon vultures, peregrine falcons or eagle owls and let your imagination soar along with them.

Alburquerque’s castle is one of the few fortresses that survived the artillery. It’s a castle characterised by its authenticity, it’s one of the few defensive constructions that keeps its military identity.

It’s built with spare and blocks of stone, in the finest parts. The enclosure consists of four defensive areas that are staged throughout the hillside which is the entrance of the village. The first enclosure is composed for a barrier with bastions that separate the village from the fortress, this construction was made when the square occupied by the Portuguese between 1705 and 1716.

The second defensive element is constituted by the access ramp or list roads, as well as, the four entrance doors that drive us to the patio, where the assailant is easily collapsible from the wall of the superior enclosure. In the second door there is the shield of D. Beltrán de la Cueva.

Highlights of the patio: The late Romanesque church know as Santa María del Castillo, the dining room,  the canteen, the soldiery’s bedrooms and the well. All of this dominated by the impressive watchtower of the Homenaje’s tower, build by D. Álvaro de Luna. By one of its sides it is the door to the second enclosure, known as “Plaza Alta” where it stands out the Cinco Picos’stower with pentagonal shape and the drawbridge with more than ten metres that joins this tower with the Homenaje’s tower.

Homenaje’s tower is as tall as a five story building and it’s build with sections of masory and granite’s corners. The whole tower is crenelated, and offer machicolations in the centre of the faces. Other important rooms in this patio are: The house of the Governor, the well and the canteen. But one of the reasons why this fortress was built it’s for control the oldest frontier in Europe and the only political one. From its walls we can see the frontier squares of Ouguela, Marvão or Elvas.