Pedro I the Cruel (II). Through the lands of Extremadura.

The route runs through some of the castles linked to the figure of King Pedro I of Castile (1350-1369), known as the Cruel or the Just, whose reign ran between the open crisis with the spread of the Black Death in Castile and its confrontation with the nobility of the kingdom, which would culminate in the murder of King Pedro in Montiel (Ciudad Real) in March 1369 at the hands of his stepbrother, Enrique, the Count of Trastamara.

Pedro I of Castile (1334-1369, king between 1350-1369) lived turbulent times, marked by the spread in Castile of the Black Death and an unprecedented economic crisis. Assuming the project to strengthen the royal power promoted by his father, Alfonso XI of Castile, he began a confrontation with the nobility, which earned him the nickname "The Cruel", among his opponents, and "the Just", among his faithful, due to the executions carried out by the monarch. Among his victims, there would be figures such as his stepbrother Fadrique, master of the military order of Santiago, the noble Pedro Núñez of Guzmán, whom the king “made kill in Seville very cruelly”, or the emir of Granada, known among the Castilians as the “Red King." This attitude, together with the prison and subsequent murder of his first wife, Blanca of Borbón, niece of the king of France, thinned the political life of the Crown and raised the noble opposition against the king.

This rebel nobility would be headed by Enrique, count of Trastamara, bastard son of Alfonso XI and his lover, Leonor of Guzmán, born in the bosom of one of the most influential lineages of Castile. Enrique, early on, defended various rebellions and was able to establish an alliance with the former "private" or favorite of the king, now fallen out of favor, the Portuguese-born nobleman Juan Alfonso of Albuquerque. Later, from his exile in Aragon and France, Enrique was able to lead the resistance against Pedro again. First in the context of the war between Pedro I of Castile and Pedro IV of Aragon, known as the War of the Two Pedros (1356-1366). Subsequently, as an absolute protagonist, in the context of the Castilian civil war (1366-1369), which would have its beginning at the end of 1365, when the Count of Trastamara was able to cross the Pyrenees and reach the city of Burgos, where, in the spring of 1366, he would be proclaimed as king of Castile, after declaring Pedro I illegitimate monarch, under the charge of tyranny.

The conflict would only come to an end in 1369, when Enrique killed his stepbrother near the castle of the Star of Montiel (Ciudad Real), taking advantage of Pedro's exit from his refuge, to negotiate an graceful escape from the fence he was under. It was on the night of March 22-23, at the inn in Beltrán Du Guesclin, leader of the French mercenary troops known as the White Companies, allies of Enrique, where Pedro, after being the victim of an ambush, thinking of finding his salvation, found death.

When King Pedro, wounded in the face after Enrique's first onslaught, fell to the ground, he did not give up everything for lost, because in the hand to hand fight Peter was able to reduce his stepbrother, standing on top of him. It was then that a helping hand - which tradition identifies, either with the Galician nobleman Fernán Pérez of Andrade, or with Du Guesclin himself - acted quietly and, while turning around the kings, placing Enrique on top of his stepbrother, pronouncing, justifying his action, the death sentence of King Peter: I neither take away nor put a king, but help my lord. Enrique, now immobilizing Peter, already with his back on the ground, was able to sink the dagger he carried in the king's body and then decapitate him.

This route runs through some of the places linked to the figure of Pedro I the Cruel in the Castilian, Extremaduran and Andalusian areas. Starting from the castle of Cuellar (Segovia), inhabited a few days by King Pedro on the occasion of his second marriage to the Galician noblewoman Juana of Castro, the route passes through the Parador Castle of Sigüenza (Guadalajara), where Pedro I put his wife Blanca de Borbón in prision, by the castle of Oropesa (Toledo), seized by Pedro I from its owner Juan Núñez of Lara, to make it one of the centers of the civil war against Enrique, under the control of the warden García Álvarez of Toledo, by the castle of Consuegra (Toledo), scene of the Romance of how King Don Pedro wanted to take the castle of Consuegra and kill the prior of Sant Juan, by the castle of Trujillo (Cáceres), owned by María of Portugal, mother of King Pedro, by the castle of Luna or Alburquerque (Badajoz), owned by the king's private, Juan Alfonso of Alburquerque, besieged by Pedro I himself in 1354, by the House of Pilatos palace (Seville), where is still preserved the old bust of Pedro I linked to the famous Hispanic legend of Candilejo or the Head of King Don Pedro, by the Parador Castle of Carmona (Seville), which is tuned to a splendid palace by Pedro, to remain next to his lover, María of Padilla, and, in the final section of the civil war, in custody of his children and in deposit of his rich treasure, and finally by the castle of Almodóvar del Río (Córdoba), where the monarch imprisoned some of his opponents during the Castilian civil war. 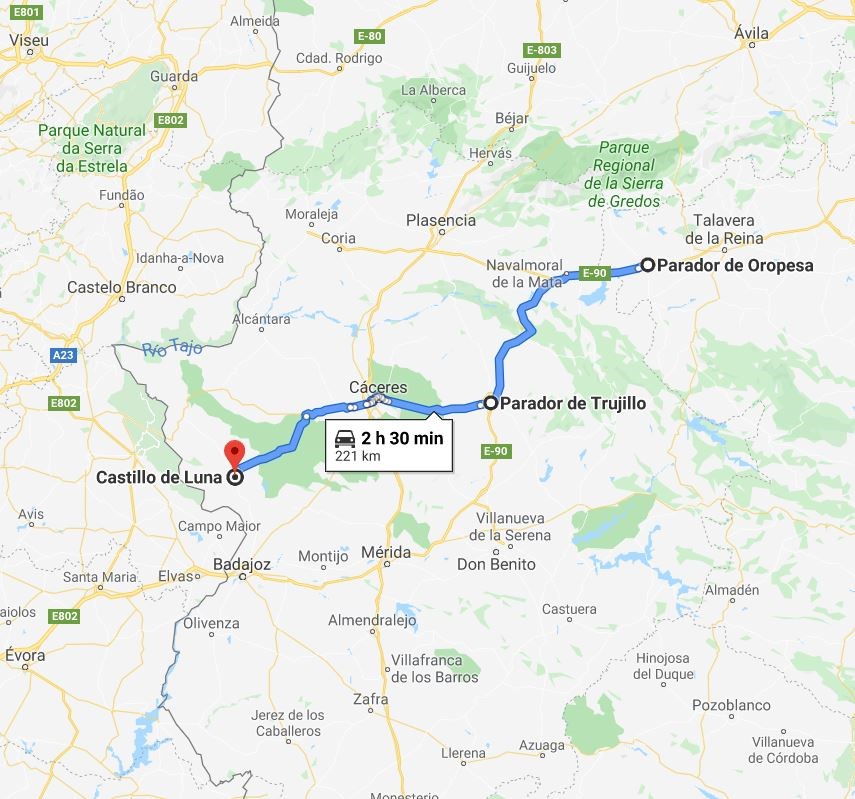 This route links with

Pedro I the Cruel (III). Tthrough the lands of Andalucía.

The Parador Museo de Oropesa is a beautiful building that transmits its history and legends through spectacular function rooms, columns and arcades, an imposing courtyard and the enigmatic keep. It was once the ancestral home of the Álvarez de Toledo family, counts of Oropesa, and in past times sheltered soldiers, religious persons and nobles. In 1930, it was converted into the first historic Parador in the government-owned chain, paving the way for a network of lodgings located in castles, palaces, convents and monasteries which is unique in the world. A stay at the hotel becomes a date with history in an enticing location where you can relax and enjoy the spectacular views of the Sierra de Gredos mountains and excellent cuisine.

In Oropesa, you will discover a pleasant medieval town dotted with historic convents and monasteries, churches and palaces. The Parador, which can be seen from the highway connecting Madrid with Extremadura, is the finest example of the historic and scenic riches this area has to offer.

In the month of April, you can attend Oropesa's Medieval Days, when the town recreates its magnificent past. The Parador becomes the perfect place to travel back to another time and feel like true kings and queens of the Middle Ages.

In the historic city of Trujillo, birthplace of discoverers, you will find this lovely Parador, occupying the former convent of Santa Clara and preserving the peaceful and calm atmosphere of the convent buildings. Inside there are two lovely cloisters, one with Renaissance arches and columns. The second gives the complex a touch of brightness that makes the atmosphere even more beautiful. This is an ideal hotel for relaxation and leisure, as well as work. The rooms are peaceful and the Parador offers beautiful, elegant function rooms, along with a seasonal swimming pool.

In Trujillo, all roads lead to the Plaza Mayor (Main Square), the heart of the city, surrounded by very beautiful and important buildings. In the middle of the square stands the bronze statue of Francisco Pizarro astride his horse. Together with San Martín de Tours Church, the Palacio de la Conquista (Palace of the Conquest) and the Casa de las Cadenas (House of the Chains), it will leave you with the memory of a truly beautiful square. Trujillo Castle is another lovely spot. It is visible from any point in the city and houses a sanctuary dedicated to the patron saint, the Virgin of Victory.

Trujillo is blessed with all the charm of a historic city and the beauty and serenity provided by the passing of time. This is a place you will love discovering.

Alburquerque’s castle is one of the few fortresses that survived the artillery. It’s a castle characterised by its authenticity, it’s one of the few defensive constructions that keeps its military identity.

It’s built with spare and blocks of stone, in the finest parts. The enclosure consists of four defensive areas that are staged throughout the hillside which is the entrance of the village. The first enclosure is composed for a barrier with bastions that separate the village from the fortress, this construction was made when the square occupied by the Portuguese between 1705 and 1716.

The second defensive element is constituted by the access ramp or list roads, as well as, the four entrance doors that drive us to the patio, where the assailant is easily collapsible from the wall of the superior enclosure. In the second door there is the shield of D. Beltrán de la Cueva.

Highlights of the patio: The late Romanesque church know as Santa María del Castillo, the dining room,  the canteen, the soldiery’s bedrooms and the well. All of this dominated by the impressive watchtower of the Homenaje’s tower, build by D. Álvaro de Luna. By one of its sides it is the door to the second enclosure, known as “Plaza Alta” where it stands out the Cinco Picos’stower with pentagonal shape and the drawbridge with more than ten metres that joins this tower with the Homenaje’s tower.

Homenaje’s tower is as tall as a five story building and it’s build with sections of masory and granite’s corners. The whole tower is crenelated, and offer machicolations in the centre of the faces. Other important rooms in this patio are: The house of the Governor, the well and the canteen. But one of the reasons why this fortress was built it’s for control the oldest frontier in Europe and the only political one. From its walls we can see the frontier squares of Ouguela, Marvão or Elvas.