By David Nogales Rincón, Professor of Medieval History at the Autonomous University of Madrid.

The route runs through some of the strengths of the area of ​​La Mancha, border territory with al-Ándalus, whose control was linked during the Middle Ages to the almighty military orders of Calatrava, Santiago and San Juan, who assumed the defense of the Christendom against Islam through the use of arms.

The military orders, institutions born in the Holy Land in the decades after the conquest of Jerusalem by the Crusaders (1099), which would combine war and religious ideals in the defense of Christianity against the infidels, would have to reach a special importance in the kingdoms of León and Castilla during the Middle Ages. It will be from the twelfth century when not only the installation on the Peninsula of the international orders of the Temple and the Hospital of St. John of Jerusalem, born in the East, but also the almost parallel foundation of specifically Hispanic military orders will take place, under the protection of the kings.

The first of these Hispanic orders will be the Castilian of Calatrava (1158), founded, according to the idealized story passed to us by the ancient chronicles, following the abandonment by the Knights Templar of the La Mancha fortress of Calatrava (Ciudad Real). An abandonment that would lead to his defense being assumed, after the offer made by King Sancho III of Castile, by Raimundo, abbot of the Navarrese monastery of Fitero. This foundation would follow, shortly after, the creation of the Leon orders of Santiago and San Julián del Pereiro, later renamed as Alcantara.

The bulk of these orders were made up of the religious known as freires knights, subject to a specific monastic rule and to the monastic vows or commitments of chastity, poverty and obedience, usually assumed by these gentlemen in a softened way, to the point of being, in some cases, eliminated in the final moments of the Middle Ages. Away from the contemplative function of prayer, typical of the monks, these freires, according to the Sayings of the Holy Fathers, written by the santiaguista (follower of Santiago) Pedro López de Baeza, would have as their main objective "to serve God and the king and your order against the enemies of the faith”, because “it is necessary to fight for the faith of Jesus Christ ”.

Above these freires, was the figure of the master, supreme governor of the order. A position of great prestige and importance in the Castilian political life of the late Middle Ages, to the point of being usually in the hands of one of the great nobles near the monarch, such as Álvaro de Luna or Juan Pacheco, Marquis of Villena, masters of the order of Santiago, or the infant Sancho, son of Fernando I of Aragon, master of Alcántara.

Inspired by the miraculous help given, in the heat of battle, by the apostle James or Saint Isidore to the Christians, the knights of these orders played an important role in the peninsular crusade, participating in some of the most famous battles and campaigns that they would forge the legend of the Reconquest, like Alarcos (1195), the Navas de Tolosa (1212) or the War of Granada (1482-1492). However, military orders also began to play an important role in the defense and organization of the new conquered spaces, as happened in La Mancha. Its immense plains were, from the twelfth century, entrusted to these military orders by the monarchs, first, as a large border space in dispute, inhospitable and almost ghostly, that separated the city of Toledo, in Christian hands, from the still Islamic city of Cordoba. Then, from the first decades of the thirteenth century, after being secured this area thanks to the Christian victory in the Navas de Tolosa (Jaén), as a fully integrated space in the Crown of Castile, colonized and exploited economically under the government of the frieres sanjuanistas (followers of San Juan), calatravos and santiaguistas.

All this has left a deep mark today, fossilized in the memory of its inhabitants and in the toponymy of some of its regions, such as, for example, the Field of Calatrava or the Field of San Juan, dotted today by the castles, towers and watchtowers from which, in the past, these military orders dominated the extensive plain of La Mancha.

The route runs through the Castilian-La Mancha territories linked to the military orders of San Juan, Calatrava and Santiago. Starting from the castle of Alcalá del Júcar (Albacete), linked to the figure of Don Juan Pacheco, marquis of Villena and master of the powerful order of Santiago, the route runs through the castle of Alarcón (Cuenca), belonging to the order of Santiago since the end of the twelfth century, by donation of King Alfonso VIII of Castile, which, after passing into the hands of the Crown, first, and the famous Castilian nobleman Don Juan Manuel, later, would remain at the end of the Middle Ages held by the referred Juan Pacheco, by the castle of Garcimuñoz (Cuenca), whose reconstruction would be promoted in the second half of the fifteenth century by the aforementioned Juan Pacheco, whose walls would have died the well-known poet Jorge Manrique, author of the Coplas at the death of his father, aimed at honoring the memory of his father the master of Santiago, Don Rodrigo Manrique, for the Belmonte Castle (Cuenca), owned, at the end of the Middle Ages, of the aforementioned Juan Pacheco, who, in his condition as master santiaguista, dis He placed in this castle the cross of Santiago and decorations based on scallops or shells, in memory of the order, by the imposing monastery of Uclés (Cuenca), built in the 16th century on what was originally a fortress of Islamic origin, donated by King Alfonso VIII of Castile at the order of Santiago in 1174, which would become, over time, the mother house of the order and instead of the residence of his masters, by the castle of Consuegra (Toledo), owned by the order of San Juan since 1183, thanks to the donation made by the many times cited Alfonso VIII, which would be responsible for building, throughout the twelfth and thirteenth centuries, some of the structures we see today, becoming, from the fourteenth century, the headquarters of the priory of Castile and Leon, and by Almagro (Ciudad Real), headquarters of the general chapters of the order of Calatrava and residence of its masters since the fourteenth century, to end in the Sacred convent and castle of Calatrava la Nueva (Ciudad Real), built after the Christian victory of Las Navas de Tolosa in 1212 and converted, shortly thereafter, into the mother house of the Calatrava order, where the master and his court would be installed, once the nearby fortress was abandoned from Calatrava la Vieja, who had seen the birth of the order. 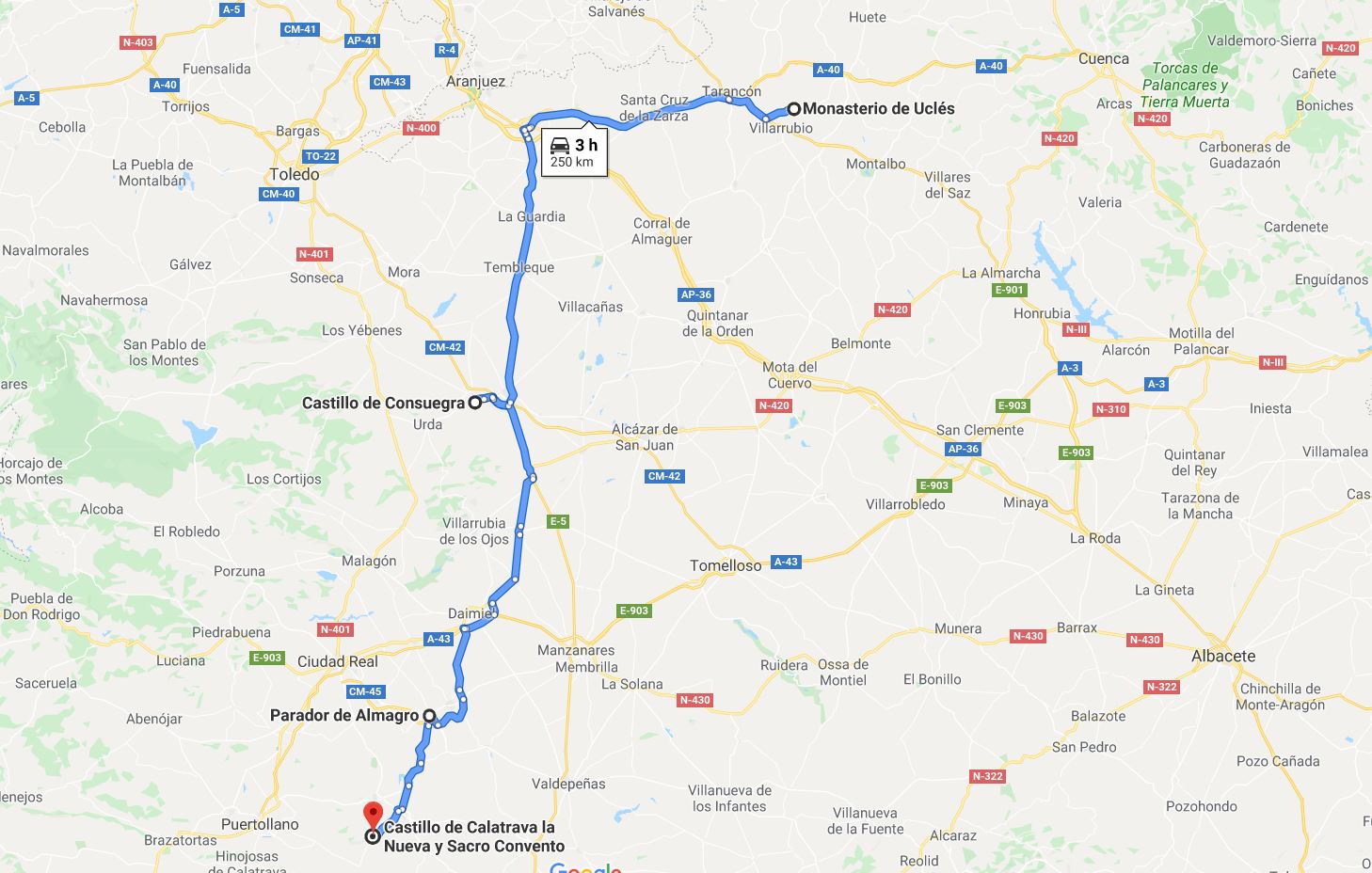 This route links with

By David Nogales Rincón, Professor of Medieval History at the Autonomous University of Madrid[...]

The fortress began to be built in the middle of the 9th century during the splendour  period of the caliphate of Cordoba, its construction being completed in the middle of 13th century by the knights of the Order of Saint John of Jerusalem, over 350 years of uninterrupted construction and since then three different castles can be visited in a single building.

The order made it the capital of an extensive priory. The cession of the castle and its alfóz was made in 1183 by Alfonso VIII to the knights, although the fortress had been already reconquered by Alfonso VI, exactly one hundred year before, being the place of constant war, it was lost going from Christians to Muslims repeatedly so that finally moving to the kingdom of Castile.

The enlargements and reforms of the castle continued throughout the centuries to adapt gradually to the uses and customs of each era, providing it with a archive, chapel, chapterhouse, water cisterns, powerful defenses (it was necessary to break 7 doors to access to the central core of the strength and the average thickness of its walls is 4.5 meters and the height of its towers of 30 meters, which together with its strategic position, gave it an impregnable aspect).

Its last extension was made in the XVII century with the intention of housing a new hermitage. The fortress remained inhabited until the beginning of the 19th century. In the year 1813 the building was blown up by Napoleon's troops and left in ruins. In 1837 Mendizábal expropriate the castle to be finally acquired by the City Council in 1962.

It is currently in the rehabilitation phase having recovered 50% of the castle. Today it is possible to visit two of three water cisterns, gallery, archives shed, hermitage, chapterhouse, albarrana tower, terraces,  garden, barbican and the steps of the round, being used for theatrical performances and cultural events.

The Castilian city that is home to the Parador de Almagro has been declared an Area of Artistic-Historical Importance. According to tradition, the city was originally an Arab castle known as Almagrib. The name refers to the characteristic clay of the region, which has a red ochre (almagre) color. You will find it in the Plaza Mayor (Main Square) and other buildings in the historic district. Our Parador is just five minutes from the Plaza Mayor. The building is a former monastery dating from the 16th century. It is very comfortable and peaceful, with a swimming pool, interior courtyards, bright galleries and beautiful woodwork. We offer an ideal location to spend the night and enjoy the unforgettable experience of exploring every corner of Almagro, with sunny afternoons at the terrace cafés in its squares, and one-of-a-kind sunsets amid the bounty left to us by nature in nearby spots such as Las Tablas de Daimiel National Park.

You won't want to miss the Corral de Comedias in Almagro, the only open-air theater to remain intact and in operation since the early 17th century. It still serves as a theater, with a busy schedule of performances, as you will see when you visit the city. This historic/artistic site also hosts the prestigious International Classical Theater Festival.

The Corral de Comedias is one jewel in Almagro's crown, but it has many more! You can follow its Route of Castles, which will take you from Old Calatrava Castle to the Alarcos-Calatrava Archeological Park and New Calatrava Castle.

Less than one hour from the Parador, the lovely natural areas of La Mancha offer unique spaces such as Cabañeros National Park, Lagunas de Ruidera Nature Reserve and Tablas de Daimiel National Park, a festival of nature's beauty, an oasis in the middle of the plains of La Mancha, the perfect panorama to gaze upon. An experience you are sure to love.